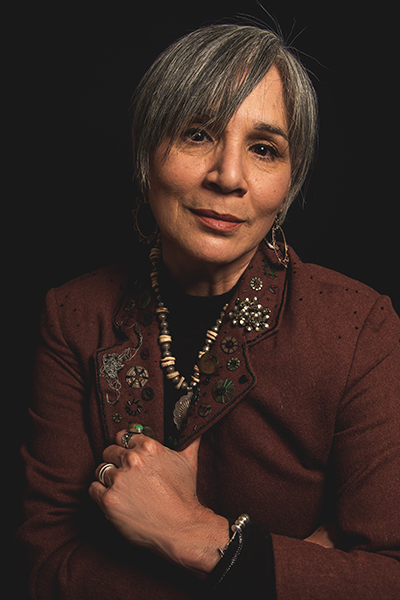 As a Dene Nde’ poet, historian, and writer, a key interest is maintaining close ties and critical engagement with Dene Nde’  peoples, principles, philosophies, intellectual history and decolonial recoveries. I remain focused on grief, loss, kinship, belonging, and the crucial expressions and assertions of beingness through Dene Nde’ lenses, concepts, resistances, achievements, and social justice processes. Dene Nde’ women’s perspectives on governance, their roles in and threaded across complex and overlapping communities, and their experiences as targets of colonial resource and territorial wars and their subjectivities in bordered and carceral spaces are core to my understanding of Dene Nde’ colonization and resurgence.

My philosophy and productivity are informed by critical and Indigenous feminist thought and activism which I employ to (re)position Dene Nde’ ways of knowing and doing as a process of questioning and challenging colonial thought, norms, presumptions, epistemologies, systems, structures, and categories which continue to subvert Dene Nde’ communities, families, bands, and extended kinship structures now heavily fractured and factionalized by and through colonial legal regimes, such as border structures.

I enact Dene Nde’ world views of nizhoni (harmonious beauty relationality and expression of high consciousness as a metaphysics and paradigm) — a state of being highly sought after and aspired to amongst Nde’ 21st century artist-justice-warriors. Practically speaking, Dene Nde’ peoples, divided by 2 militarized settler borders, are deeply challenged by violent recognition regimes and colonial schemes which have split up the Dene unification and seek peace proactively.

My current focus on the reconstruction of the Dene Nde’ gowa gozhoo gokal, ‘her beautiful house of law’–through community-based, traditional knowledge, poetics, visuality, oral tradition, story, archival, and language recovery searching– is central to my on-going research process.  I actively participate in the creative-critical recovery and revitalization of Dene Nde’ poetics, law, philosophy, feminism, and praxis as embodied and enacted through my teaching, scholarship, and service.

To accomplish my goals to centre Dene Nde’ lenses as a Dene Nde’ researcher, I interweave oral tradition, history, poetry, oral tradition, archives, community collections, memory and commemorative practices.  These include narrative (re)construction, tipi mural painting, dance, textile and buckskin arts, collage, photography, legal studies, and language revitalization in the co-creation of the Dene Nde’ gowa gozhoo gokal. This is an on-going 21st century process which acknowledges the on-going upheavals and cataclysms which Dene Nde’ peoples are still experiencing as ‘implosions’, ‘explosions’, and ‘catastrophes’ which propel us into movement and mobilization through and across Niguusdzan. Dene Nde’ being and belonging throughout the hemisphere is enacted within and in the Syilx territory.  My research process encompasses a 3 year protocol and relationship building process undertaken with Syilx Native Title holders in the Nk’malpqs community, OKIB reserve.  This is a critical revitalization of Dene Nde’ belonging.

Find out more about my research at my UBC blog.

Selected publications can be found on Google Scholar and Academia.

Apologies, but no results were found.